It’s the second part of a Brach’s doubleheader to close the 2022 regular season, and it’s a wild one! (If you missed yesterday’s review of Brach’s Rainbow Sparkle Jelly Bird Eggs, I recommend you go back and catch up on the context around Brach’s jelly beans and bird eggs.)

Of the new jelly bean releases in 2022 (that I am aware of), none have caused as much of a stir as this unconventional offering. This is easily the most “novelty” collection I have reviewed since the beginning of the site – a “gimmick” set, as Penny would say – and I am certainly trepidatious about the flavors here that are not based in real world foods that are sweet. But as always, let’s look at the physical characteristics and come back to that.

These would seem to be made in the mold of Brach’s other products described as “jelly beans” (rather than “bird eggs”). They are slightly smaller on average than yesterday’s Rainbow Sparkle Bird Eggs, and have good consistency in their size. The shape, which does vary more widely, is more bean-shaped than egg-shaped. Most of them show evidence of a meager attempt at dimpling. 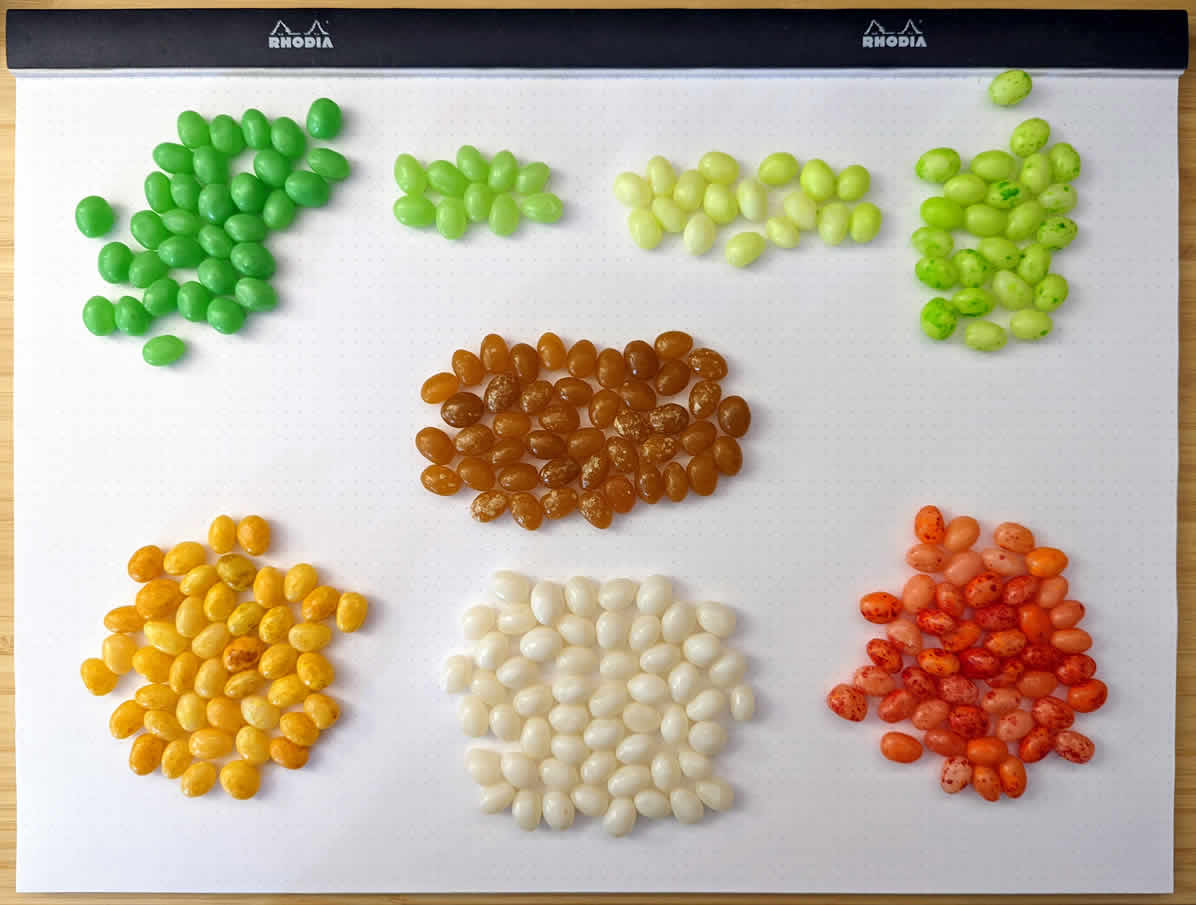 While not technically part of the rating, I have to comment on the inconsistency of the coloring of the shells. For the most part, it isn’t a huge issue to tell the flavors apart, but you can see in the photo above that there is an array of green beans whose coloring falls somewhere between what are clearly the Margarita and the Guacamole beans. These further divide into a couple of subgroups that are close to each other, which do, in the end go with the larger group they are closest to, but they could definitely be mixed up if you were trying to pick a specific one out of a mixed bowl.

Like yesterday’s, these beans rate well in this category, but they trade a little bit of resistance in the shell for better resistance on the inside.

The texture of these beans is also outstanding. The shell could break up a little chunkier, but the smoothness of the insides is a definite improvement from yesterday’s bird eggs.

Alrighty, here we are. An assortment of the strangest flavors I’ve yet to encounter. (No, I’ve never tried the Jelly Belly BeanBoozled beans, or their Harry Potter branded variant, Bertie Bott’s Every Flavour Beans.)

The six flavors can naturally be divided into two groups:

The weirdest thing about the savory flavors is that they are all still really sweet! Maybe I should have expected that, since they are still jelly beans, but I was somehow hoping for straight up savoryness. And none of them are especially pleasant.

This was a super intriguing set from an otherwise pretty traditional maker, but unfortunately, it really didn’t hit the mark.

Perhaps the ultimate test of a bag of jelly beans is how enjoyable it is to take one of each flavor and eat them all at the same time.1

This is a really tough bunch of beans for this particular test. Clearly, it would be folly to try to eat them all at once, and despite the footnote linked above, I wouldn’t feel right excusing a full half of the beans in this set.

There are a couple of good two-bean pairings, though! Churro and Horchata work very well together, as do Salsa and Guacamole. All six would be quite the train wreck, though, and the score reflects that.

I have to give credit to Brach’s for taking a big risk with this set. And I have to suspect that it was a commercial success, just due to its novelty factor. Unfortunately, the proof was not in the pudding, and it’s not a set I can recommend to the general public. It’s fun for a few eyebrow-raising minutes, but if even I can’t imagine getting through a whole bag, it’ll likely be a waste of money for most people.

Thus concludes this season of A Boy and His Beans. Thank you all for reading, and see you next year!