In what I hope will become an annual tradition, I am welcoming special guest reviewer Penny Sterling back to the site to review another set of spice-flavored jelly beans! Last year, Penny reviewed Brach’s Spiced Jelly Bird Eggs, and you can probably guess how well that went. (How well it went for the beans’ rating, anyway. It went very well in terms of publishing a high quality review!)

If you want to know something about your host for this blog, Scott Cranfill looked at the dumpster fire of a review I gave last year and said, “Do it again! Meaning he dislikes spice jelly beans more than bad writing.

So I’m back for another round. I’m going to be reviewing the beans we failed to find last year: Just Born Spice Flavored Jelly Beans. And once more, I will be following the CBE (Cranfill Bean Examination) routine very carefully. And, as happened last year, my son Fred appears in this review.

These beans, compared to last year’s BRACH*S Spiced Jelly Bird Eggs, are small, although not in the Jelly Belly range. They were, at first glance, fairly consistent. But as we worked through the bag, some radical abnormalities appeared, ranging from a lentil-sized pink bean, and up to a caterpillar-sized yellow one. Both tasted okay, tho. 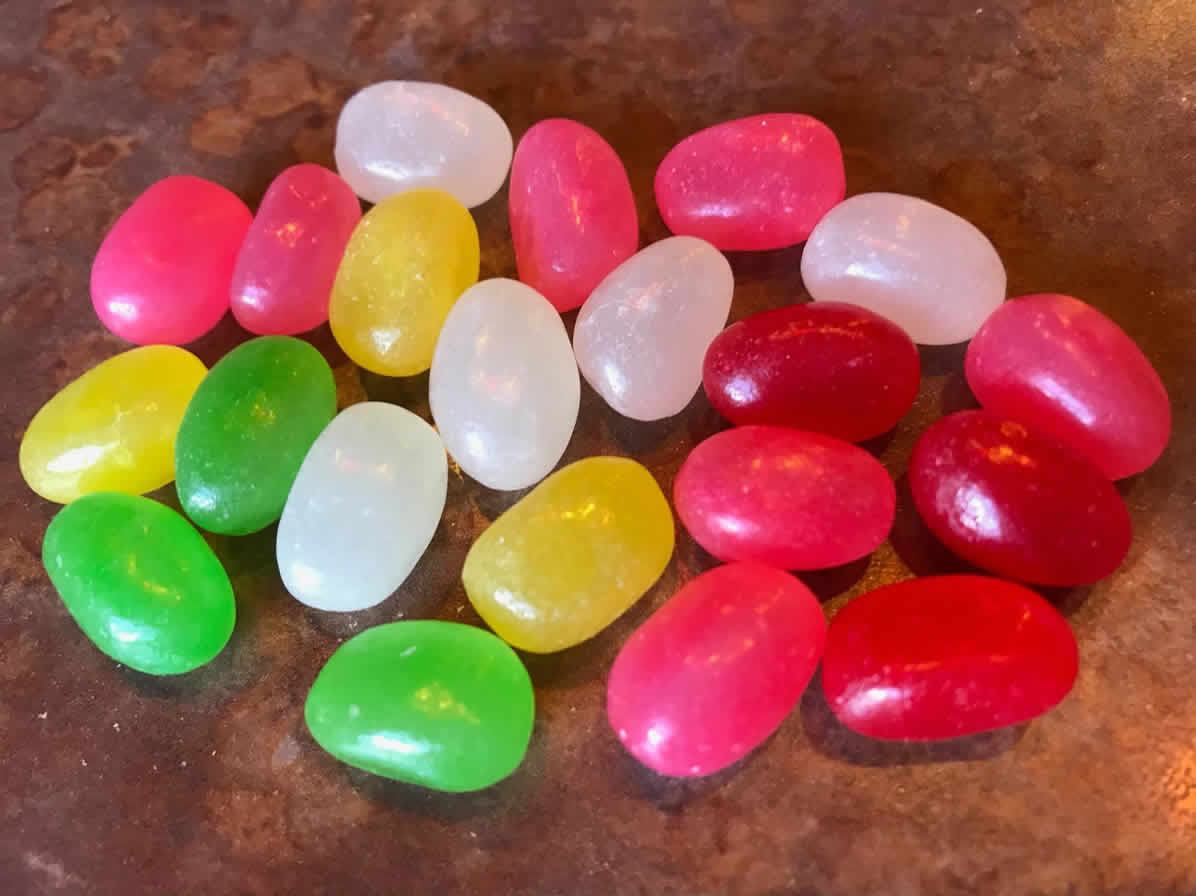 Shape was also a mixed bag. Even the ones with consistent sizes were not a smooth ovoid. They were dimpled and misshapen. This really isn’t an issue for me, but it does ruin the aesthetic, and if I’m gonna pay attention to a consistency in size, I gotta give this group low marks for shape. To be honest, though, the default size for these beans is pretty dang perfect. They’re just the right size to swipe a mittful and come away with a decent blend of flavors. At least a potentially decent blend.

So, I’ll add the low number for inconsistent shape with the high number for decent size and we get… 2.5 out of 5 beans. If I can’t do a half-bean measurement, let’s round up to 3, since this isn’t the most important of the bunch.

[We do not allow half-bean ratings. –Ed.]

These beans were a pleasure to chew. Seriously. The bean crunched pleasantly, and didn’t stick to my teeth, meaning I did not need to use my tongue (or more extremely, my finger) to dislodge an errant bit of bean. Still, it was not as pleasant a chew as the better-known “gourmet” beans, so my score reflects that. They lasted a fairly long time in my mouth and were not at all grainy.

There was a definite shell feeling with these beans. While nowhere near as distinctive as the Jelly Belly shell, they definitely had an exterior. I decided to see how easily I could flatten a single bean with just my tongue. Fairly easily, it turns out. But as it broke apart I could definitely discern the crunchier shell from the smoother inside.

Before we get to the important categories of taste and flavor, I’d like to add another category in this review. I don’t know how Cranfill will factor it into his point totals, but at least for this group of beans it’s one that I think needs addressing:

Take a look at these beans. What do you see? More importantly, what DON’T you see? 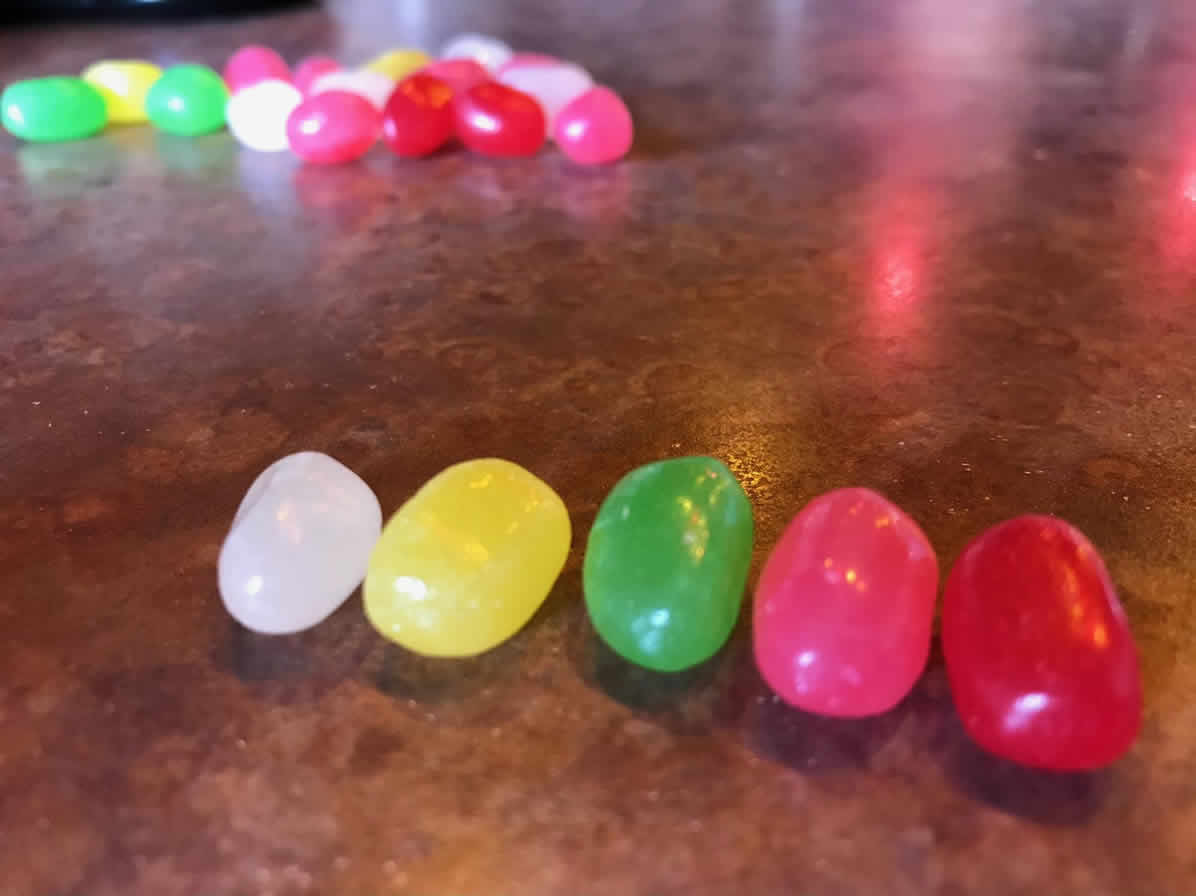 Variety. Vibrancy. An interesting mix of colors. Some BIV to accompany the ROY G. of this demirainbow.

There’s no blues, or purples, or violets, or even blacks.

“I’m fine with there being no blacks, and for the record let me state that this sentiment is only valid in this discussion of jelly beans,” said Fred. “They taste like anise.”

“You’re saying it wrong,” I told him “‘Anise’ is pronounced AN-iss, not AY-nus.”

These colors are a passionless pastiche of pale pastels.

[While the commentary is appreciated, this subscore will have to be left out of the final tally. –Ed.]

Now let’s go to the most important category:

First: taste. I judge spice jelly bean flavor on not only that first burst of perfume you get when you bite into them, but also how long it lasts. Basically, the more it tastes like flavored sugar, the less I like it.

For these beans, that first bite was pleasant. The perfume didn’t so much burst like a balloon as it did pop like a bubble, but it was definitely there. It lasted longer than the BRACH*S Spiced Jelly Bird Eggs (a year later and I’m still shaking my head at that name), but that’s not saying much. Still, I’m giving these beans a baseline of 2 for this category. How they fare in the end will be how much the flavors of the beans add to that overall taste.

So now onto the flavors, which are…

Good question. I looked on the bag after I opened it to see what the flavors were, but I didn’t see them. I checked out the Just Born website to see if they were listed there, but they weren’t.1 So I decided to give these five beans totally random names that I made up all by myself without reference to any nineties-era girl group at all:

The snobbiest of the spices. Cool and aloof, this is the bean that thinks it can go it alone, and even when grouped together, tends to stand out. A lot of people like this spice a lot. It’s one of the most popular and strongest flavors. It’s not really my favorite, so if this spice got married to a former soccer player and lived in LA. or something, I’d be okay with that. However, if you like peppermint, this is pleasantly so.

“I see they’ve decided to do vegetation flavors,” said Fred, munching on a yellow bean. “So this one must be…tree bark?”

This was a scary spice because the flavor was both strong and somewhat mysterious. It had a pungent, yet pleasant perfume, with a hint of bitterness that was covered up by copious amount of sugar. It was vaguely familiar, so I took a stab at a flavor. “I think it’s supposed to be… clove?”

Fred looked surprised. He’s been on a bit of an “old time” gum kick recently. He regularly chews both Beemans and Clove gum2, so he’s technically familiar with the flavor. As was I. If I thought about cloves as I chewed it, it tasted like clove. But it wasn’t like we bit into it and said, “Yeah, that’s clove.” It was a tasty bean, but the taste wasn’t really what it was supposed to be (which was, apparently, clove).

Ohhh, boy. Vibrant, nay, vivacious, and so zesty! This is a bean that if you like it you really like it. But even if you do like it (which I do), there is a very small window between wanting more and having too much – what the gourmands call “palate fatigue”. This bean threads that fine line between “Is that all?” and “Make it stop!” very well.

(Cinnamon, to absolutely no one’s surprise.)

Aww. Isn’t this adorable? Not as cool as Posh, not as vibrant as Sporty, not as unrecognizable as Scary. Fragrant, sugary, almost soothing. The Pepto Bismol of the bean world. Because it’s what this bean tastes like, only better because there’s no bitter bismuth. And eating too many will likely make you sick. But this bean gets this taste right. Like the taste of Pepto? You’ll like this. Not like the taste of Pepto? You’ll not like this.

(Wintergreen, of course. But why? Why is wintergreen always pink? Nothing in its name points to that color. Winter is white. Green is a color that is, a priori, not pink. Also, why is “pink” even a color? It’s just a tint of red. It’s so much not a color that it doesn’t even appear on a color wheel! Red mixed with white, but it’s not called “light red”, but pink. Crazy. Why is blue mixed with white not a separate color? Why is it not… “blink” Why isn’t green and white “grink?” Grink would actually be a better color for wintergreen, right? Bean makers need to get their acts together, and make the color match the flavor. Like raspberry popsicles do. Okay. I think I may have gotten a bit off-topic here.)

You would think the spice I designated as “Ginger” would actually be ginger, which is a fairly common spiced jelly bean flavor, wouldn’t you? Well, you would be wrong. But I had to go with Ginger Spice for this bean because I’m pretty deep into this bit, and this was the only bean left to designate.

And had there actually been a ginger spiced bean (or even a bean that was supposed to be ginger, but was not really ginger) this would have made more sense. On the other hand, I’m a woman doing a jelly bean review for a friend who set up a website that does nothing but review jelly beans, so where’s the sense in any of this?

So this is the green bean. And like every green spiced jelly bean that has ever been made, it’s got that prominent mint flavor, but with much more nuance than the Posh Spice bean. It’s got a warmer shade of cool perfume, where you can discern a spicy edge to the coolness of the perfume. And it lasts a bit longer in your mouth than the bean does, but leaves no bitterness afterwards. It’s very pleasant, very well done.

(Obviously spearmint. Why is a mint with no color reference in its name given the color that would make much more sense to give the mint that actually has this color in its na—oh goody, I’m back on this again.)

So let’s tally up my ratings on each bean individually:

Le sigh. All right. Let’s be charitable and bump it up.

Cranfill says this test is only for fruit beans. Cranfill is a coward.

It’s hard to describe the explosion of fragrances and flavors when you do this test. Of course, the peppermint stubbornly tries to separate itself from the pack, but cinnamon and spearmint do a good job of keeping her in line. Each perfume tickles a different taste, and although I can identify the flavors if I search for them, I couldn’t if I didn’t think about it. Except for peppermint, of course. Dagnabbit.

Despite not having a wider variety of beans (ginger and licorice) and fairly bland coloring, this is a solid slice of spiced sweetness. A good indicator of my enjoyment is that I needed to go out and buy a second bag, since Fred & I munched through the first one while watching a movie.3 Not a lot of better recommendations than that.

Another epic and hilarious review from Penny (and Fred)! I’m very glad that they found these beans much more enjoyable than the Brach’s from last year. I’m actually not immediately aware of any other common spice bean brands, so if you know what we should look out for next year, let us know!