That name, together with the prominent “24 Flavors” billing on the package, leads me to believe we’re getting our first attempt at a “gourmet” jelly bean in the style of Jelly Belly. Let’s find out what we’ve got here.

It is clear straight away that these are not Jelly Belly knockoffs. Nor would I call them “tiny”. They seem cut from the same cloth as the aforementioned Island Fruit and Orchard Fruit just plain “Jelly Beans”.

Shape and size both have a wide variance, with the shape mostly being a sort of middle ground between bean and egg shapes (with many beans having irregular protrusions or dimples) and the size mostly landing around an average jelly bean size (with a few outliers as tiny as a Jelly Belly and a few almost as large as a Peanut M&M).

Average size is good enough to get this category to 2 beans, but the lack of a good bean shape and consistency of form is a big letdown.

Chewability is a strength of these beans. They’re sturdy but yielding, the shell breaks apart well on first crush, and they don’t stick to the teeth too much.

Texture is overall a bit grainy, in both shell and insides. The shell is about the right thickness for beans this size, but it’s not very smooth and I would have liked it to break into bigger chunks.

Tasting a few more and considering further, I can’t actually tell if the insides are grainy or if it’s just the disintegrating shell permeating the whole bean as it’s chewed. If the shell particles were softer, like SweeTarts Jelly Beans, I wouldn’t mind, but like many Brach’s beans, these are more on the granulated sugar end of the spectrum. 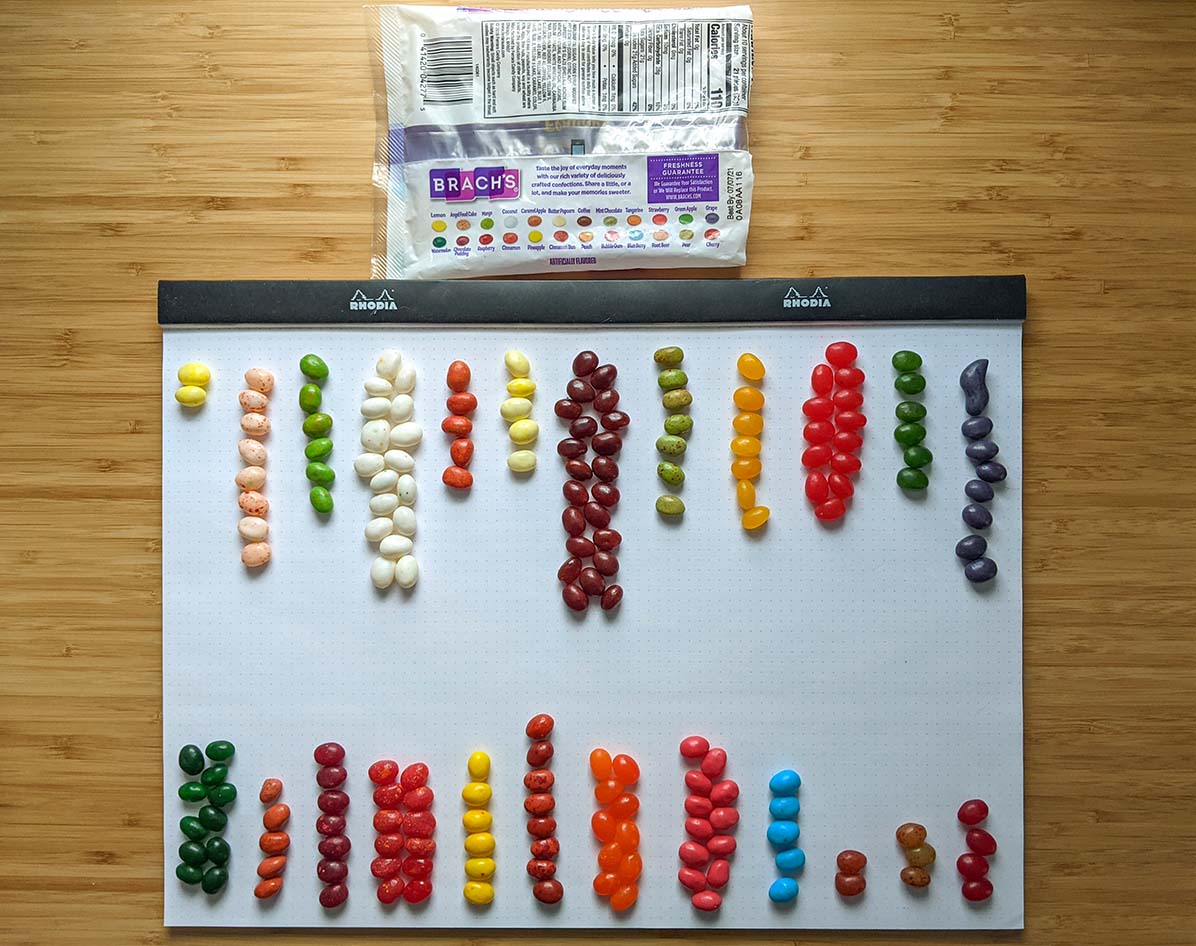 Brach’s chose a fairly interesting assortment of flavors for this collection. There are some rather unique standouts, like Angel Food Cake, Coffee, Cinnamon Bun, and Bubble Gum. There are also the requisite Jelly Belly copycats, particularly Butter Popcorn and Root Beer.

As with many collections with so many flavors, it seems difficult for them to package a distribution even approaching balanced. (Note: I had had maybe a dozen beans before realizing I had to sort them out, so the picture above isn’t a completely fair representation.) I’m glad that the plurality of beans was the very tasty Coffee flavor, but coming in second is the detestable Coconut, with the overly-spicy Cinnamon not far behind. The consequence of that is that some really good classic fruit flavors (like Lemon, Cherry, Blueberry, and Green Apple) really got the short shrift.

Not all of these beans are worth commenting on individually, but overall the flavors are very good. I would characterize the fruit flavors as hewing toward more classic interpretations, reminding me of the hard candies my grandmother would often have in her candy dish (especially the Strawberry and Cherry). My palate would prefer most of them to have at least a little hint of acidity (one of my go-to things on which to harp), but I can’t fault Brach’s too much for being true to their brand in that way.

Perhaps the ultimate test of a bag of jelly beans is how enjoyable it is to take one of each flavor and eat them all at the same time.1

(You remember the footnote, right? If not, now would be the time to refresh your memory.)

The package is roughly split between fruit and non-fruit flavors, and admitting that I can’t be sure I have a lemon left over (or even had a single one in the package), we end up with exactly 12 fruity beans for this test. That’s obviously way too many for a single mouthful, but this is The Way, so here we go.

[The author chews for well over a minute.]

That’s actually not bad! The flavors work very well together, retain some of their identifiability, and don’t devolve into a white sugar bomb (as I feared could happen). A difficult chew, of course, but I’m quite surprised at how pleasantly that many flavors can mingle.

It also seems appropriate to note in this section that there are some pretty good combos of two or three flavors among the non-fruits, like Coffee + Cinnamon Bun and Angel Food Cake + Mint Chocolate.

Another bag of Brach’s, another surprising review. While I wouldn’t place it in the upper tier, this is a bag I would consider picking up again, given how easy it is to pick out the two truly objectionable flavors, and given the presence of some interesting flavors not seen anywhere else.

Who knows what they’ll get up to next?